The Time-Machine of Grief

It is a strange thing, but lately,  as the landscape of our life keeps changing, in big ways (like buying our first bona fide family home) and small (like getting used to the particular Queensland inflection of ‘H,’ or the way EVERYTHING  important is done super early here ), I’ve noticed that the past has not faded further into the distance. Instead it seems that change, like a storm, stirs the past back into the present. I remember my parents saying a similar thing when they made a big life transition recently.

Change, the action of moving forward, does not always bid the past farewell. Perhaps this is because some things, like grief, just don’t have an expiration date.

And so it is, so many years later, that I find myself once more standing in the middle of my memories of my brother Greg, and like a swirly circle, they visit me.

But they do not come brashly, or boldly, as perhaps they used to. They  used to barge their way in, like  gatecrashers, and I would recoil in the face of them, anxious to meet, disturbed by how they could disturb my equilibrium (which was, and always is, a little fragile). In short, I would avoid them, and anything else that threatened my sense of safety or calm. Back then I trod to the beat of anxiety, jumping at its command, freezing at its order. These days, though anxiety still travels with me, I try not to let it be my master. And if memory wants to come along too, I find myself letting it enter.

These days I remember my brother Greg most often in the quiet patches. In the unexpected pockets of stillness. In the spaces inbetween. 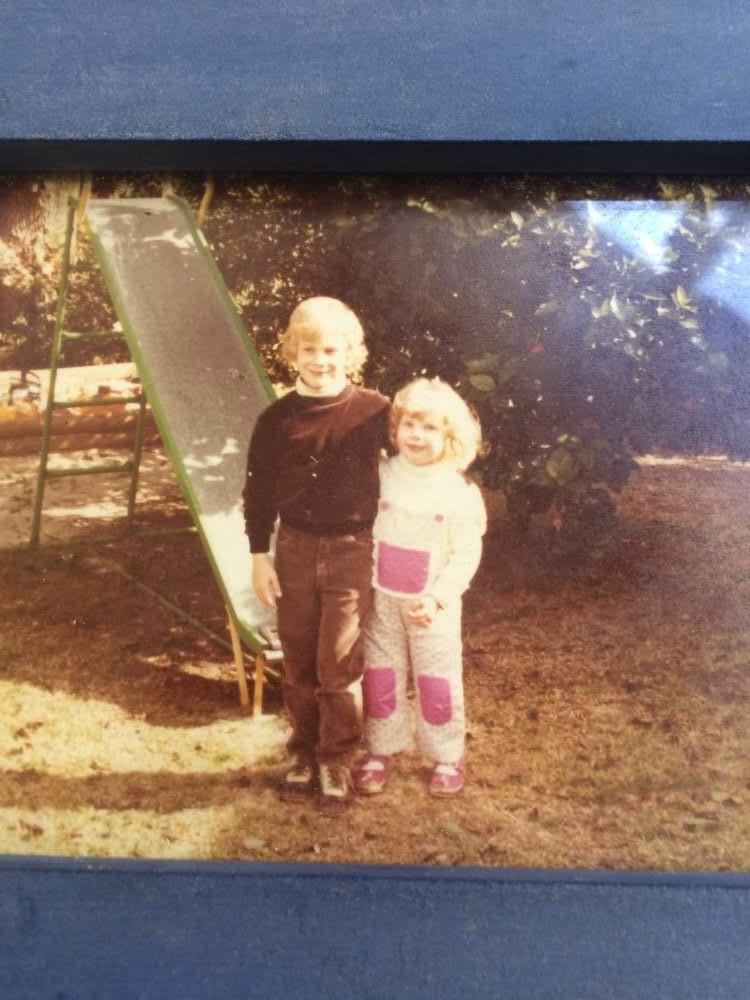 Our days, these days, are unabashedly loud. With three young, bursting-with-growth children. With jobs and houses and work. With being beings in a world that speaks, or so it seems, almost always in an outside voice,  even in the smallest spaces. With screens that at the best connect us and at the worst scream. It is relentlessly noisy around here these days.

I remember him most often when I stop and rest. When I collapse into sleep or that state in between. .When I listen to music on my bed, or the background music of brush of wing and the chirp/cry/sqwark of birds in our Australian suburban trees, it is then, often between sleep and waking, that the memories come in. Raw. Cracked open.

The distance of several decades sounds vast but it can be quickly traveled in one’s mind, which they tell us is connected to one’s gut. These things after all happened. We were them once too.

I see us as barefoot children, skinny legged and curly haired. I feel the 1980s summer sun, before we knew too much about skin cancer or the appeal of other, less natural sources of light. And my memories have sensations too. They smell of honeysuckle on the  summer wind, and they feel like the icy splash of water in the backyard pool. He liked to run along the warm brick tiles and jump bomb style into the deep end.  We’d see who could spill the most water over the edge and who could travel the longest under water without a breath. We were not so aware of the fragility of breathing then. Being was enough. I remember him in the soft papery bark of the trees that stood sentry over our various houses we called home. I recal the play etchings we’d make in that filmy parchment, before we each discovered words on paper could  glow too.

People sometimes say I have his eyes. I wonder if mine reflect the blue intensity his had, a mixture of compassion and fun and intelligence all in one, and then I think they who say this must be seeing wrong. When I stand before a mirror and look for traces of he in me, I see only sadness. Yes, it is possible to still feel sad after so long.

I don’t want to remember him as loss but that is there too now. Two decades of loving him as no-longer-here comes with its own particular sensations and feelings.

I feel him as the hole in our hearts that bleeds his uniqueness. I hear him in the gaps of the questions left unanswered, and the new memories left unmade. I see him alongside the shock and in the ache. I hear him too. ‘It’s okay to be sad,’ he’d say. ‘Even Jesus wept when his friend lazarous died. It is always good to be real.’

As I said before, the memories most often come in the quiet moments, surfacing like paper boats tremulous on water. And I relish their tender vulnerability. Though he is lost from us ( not forever, and not without a destination) he is present in my memories. He is a part of my patchy-heart. And, sadly, I know his patch won’t be the last. He will he joined by others, he already has been. But I don’t ever want to not-remember those who have left us.

In the remembering we carry them on alongside us, until we are reunited again. And hearts are sewed whole.